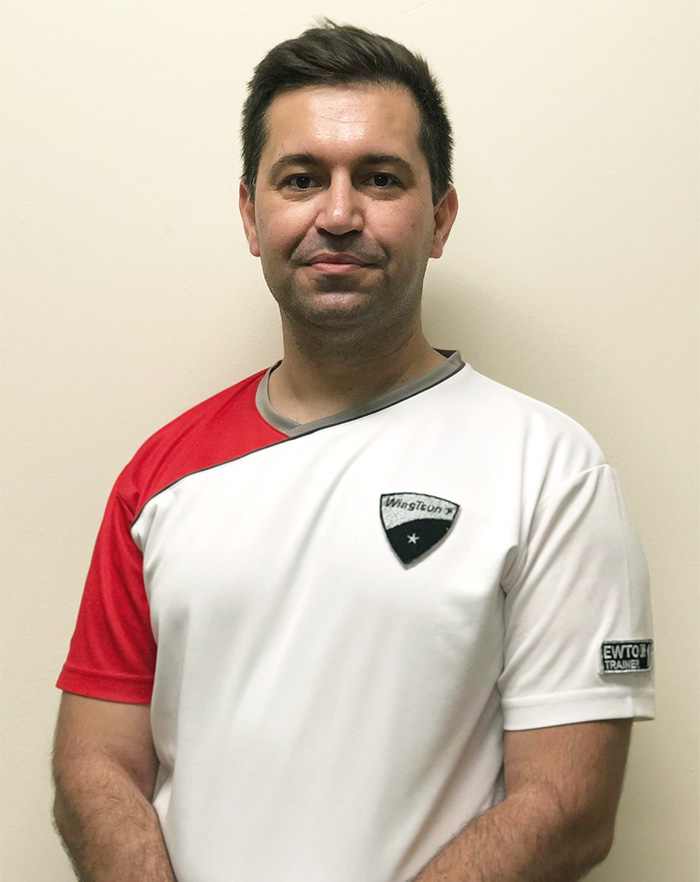 Konstantinos Zografakis, born in 1982 in Heraklion, is a thoroughbred Martial Artist. Not one day passes that he is not thinking about how to improve himself or the way he teaches his students. Giving up is no option for him, no matter what the circumstances. SiHing Konstantinos is teaching WingTsun since 2010 in his school in Heraklion, Greece and since April 2022 in our schools in Limassol and Nicosia.

In 2001 he enlisted in the Greek Army for 9 long years. He went straight to the Special Forces, where he was trained in armed and unarmed combat, special combat techniques, survival techniques, special operations tactics, on mountain warfare and in battle in residential areas.

He finished his military career with the rank of “Sergant”.

SiHing Konstantinos started his Wing Tsun Career in Thessaloniki under his first SiFu – Giorgos Tsikolas in 2006, participated regularly in all lessons offered as well as seminars and assisted his Sifu during these events. Sifu Tsikolas also taught him in Latosa Escrima, which was a branch of the EWTO at that time. After his retirement from the Army in 2010, SiHing Konstantinos returned to his hometown and opened his own EWTO school in Heraklion, Crete.

In the first years Sifu Tsikolas was visiting him in Crete 2 times per year, but eventually reduced his visits gradually as he closed the Thessaloniki school and his main schools were in Germany, which finally made him stop coming to Crete. Therfore SiHing Kostas had no chance to continue his training for some time. In 2017 he met Sifu Alexander Olich, EWTO National Chief Instructor Cyprus & Serbia, who was coming a few times per year to Crete for holidays in the years 2017, 2018, 2019 and Konstantinos who did not have any training for some time took the opportunity to train with Sifu Alex every time he was in Crete.

In 2019 a new National Chief Instructor for Greece was appointed, and Konstantinos organized a few seminars with the new instructor during the following years. As SiHing Kosntantinos was always operating his Cretan School only in his free time and parallel following his career in a full-time job in the engineering business, in 2022 his company sent him to Cyprus to support their business activities for indefinite time. This circumstance brought SiHing Konstantinos and Sifu Alexander Olich back together, but this time in Cyprus. Since Kostantinos Zografakis learned already a lot from Sifu Alexander in the years in Crete and wanted to continue his WingTsun Career now in Cyprus. Sifu Alexander took him eventually as his disciple and offered him a teaching position in our schools in Limassol and Nicosia.

SiHing Konstantinos is now a private student of Sifu Alexander Olich in Cyprus and invests heavily into his progress as a student and teacher. This year he successfully passed the first qualification as a Kids WingTsun Instructor and teaches now in our schools – kids and adults.

We are very happy to have Sihing Konstantinos in our Cyprus team of instructors. Here is what he says about WingTsun: “WingTsun for me is not only a martial art, but a lifestyle and the way how I understand the world and people. I do not know what my life would be, if I had never started WingTsun, but surely, I would not want to see this version…”