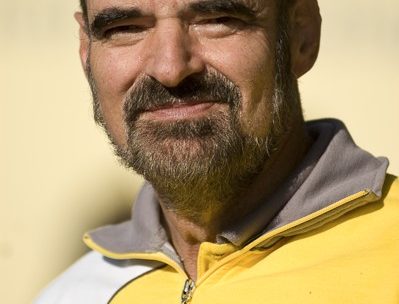 In the summer nothing can keep me in the house, I have to get outside, train outdoors, take our dachshund for a walk or drive my old, red MGA roadster.

I’ll come up with new training ideas in street cafés, making notes on beermats, while I watch the sailing ships and yachts in the harbour. This is once again the time for the “Kiel Week”, the world’s largest sailing event. Kiel is a wonderful place in the summer, surrounded by many bathing beaches.

In the evenings I usually meet up with our staff for a working meal, but also enjoy the company of martial arts teachers from other styles. Then I like to post on Twitter (GM_Kernspecht), relating with whom I have just drunk red wine and eaten carpaccio.

Then I read the recent Facebook posts that have been sent to me, and am amused when I find the new rumours about me that are spread around the world as a result of my food photos or Tweets. To my amazement I learn that I have been learning a Russian style for years, or an Israeli style, that I feel drawn to Sumo wrestling or have found my way back to Karate, and intend to give up my WT.

There is no substance to the first two rumours. Sumo has long fascinated me, and like groundfighting, I consider it an excellent method of developing torso strength. I would need to put on a bit more weight for this, however, as I weigh just 80 kg at the moment.

Karate was indeed one of my very first martial arts, and my first Karate style in the late 1950s was the super-hard Kyokushinkai Karate of Masutatsu Oyama, which takes its origin from Goju Karate in turn partly originating from a form of early WingTsun. My friend and KungFu brother from the 1970s, the Iraqi A. Sharif (Denmark), was a private student of Oyama before I converted him to WingTsun during a walk through the Tivoli gardens.
Masutatsu Oyama’s three great books were probably the first Karate books in the English language, and not only Bruce Lee but also my own SiFu were highly enthusiastic about these large, magnificent volumes. Oyama’s books were used as the model for “Wing Tsun Kuen” with respect to layout, size, binding etc.

In these books there are frequent appearances by a gigantic student of Oyama who was considered by Mas Oyama himself to be undefeatable: Jon Bluming. Oyama once said that he would relinquish his 10th Dan if anybody defeated him.
It never happened. Bluming (now aged 81) not only gained his 9th Dan in Judo, but also Oyama’s 10th Dan in Karate after the latter’s death. He did not award either grade to himself, but received them in Japan.

Jon Bluming was and still is a real hard-nut, and together with the American Judo/wrestling legend Gene LeBell he was already one of my “heroes” in the 1960s.
When I found out that he had an “encounter” with another “hero” of mine in the 1960s, this time a Chinese who I considered to be the best of them, nothing would stop me from paying a visit to Kaicho Jon Bluming to find out more and benefit from his unrivalled training and fighting experience.
Bluming, a “pioneer of the Mixed Martial Arts” who combined Judo and Karate (and later Thai boxing and Sambo) into “allround fighting”, gave a highly interesting talk on the Japanese martial arts (Judo, Karate, Aikido etc.) in the 1960s and 70s for our (English) Bachelor course of study (Theory & Practice of Martial Arts), and this was enthusiastically attended by the Dean and Vice-Dean of Plovdiv State University who had made a special journey. Bluming showed us his most successful methods when standing, and especially on the ground. The latter met with particular interest on the part of our students, and some months later Kaicho Bluming went with us to the State University of Plovdiv in Bulgaria, with which we are holding a Master course (in WingTsun!) he demonstrated it to 300 students from various martial arts.
One very instructive aspect for the course of study is Bluming’s unique method of scientific groundfighting, which combines strikes mainly with control using the forearms, and his well-tried way of progressively building up fighting spirit in his students (essential capability No. 7).
I have been able to enlist the services of Grandmaster Bluming, whom I consider to be the greatest living authority on Japanese Budo and allround combat, in evaluating my most seasoned fighters, and for further courses for our students and teachers, as he is able to report on a time gone by when the Asians still dominated the martial arts world.

Of course I have not strayed from “my” WT, though I must confess that I prepared very thoroughly for my encounter with Kaicho Bluming by polishing up my old theoretical and practical Karate knowledge. This even applies to the (Kyokushinkai) katas, for which the uncompromising fighter Bluming himself says he has little regard (“There has never been a kata champion able to defend himself against his grandmother if she was wielding an umbrella.”)

Despite a torn shoulder ligament I have tentatively started with light power training again. Not because I need it for WT, but because a pumped-up biceps flatters my ego when driving my convertible.

Yesterday I invited my 92 year-old cousin Waldemar for a meal, during which he mentioned that he still performs more than 100 press-ups at a stretch every day. He proved it right there and then, by easily doing 50 press-ups between three restaurant chairs, until the diners at the other tables started pointing at us.

As a programme contrasting with super-hard Oyama Karate, I again intend to occupy myself in the field of the inner Chinese styles with my Chinese friends. Not by learning the “techniques” of TaiChi etc. from them, but by confronting my WingTsun with their inner methods: their pushing against mine, my pulling against theirs. As always, the students taking our courses of university study will be the first to benefit from these living physical experiences.

After the summer I plan to carry out further extensive studies in Asia, the home of WingTsun. And I will also explore other inner styles, as the late Prof. Tiwald advised.

I have also revisited my BlitzDefence programme, and will make extensive additions to take into account the further, inexorable degeneration of what I have christened “ritual combat”, so that our students are even better armed for the reality that actually happens. Because ritual combat too is not what it once was.
Nowadays people bring knives or helpers with them, kick the downed opponent in the head with sometimes fatal results etc.

I am still not at all sure how I will nonetheless manage to present another new book to you in 2015, but let’s wait and see …