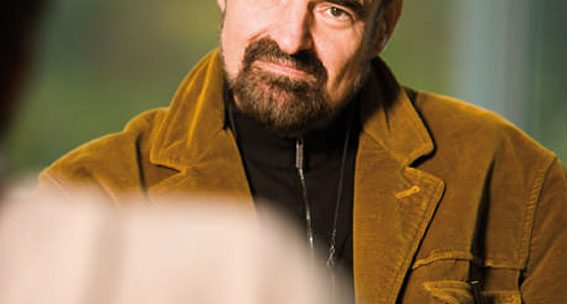 What are you currently engaged in?
Fundamentally resolving the same problem that has preoccupied me since the end of the 1950s: how can I defend myself with as few movements as possible? Or rather, by the very nature of my movements.

And you needed more than 55 years to find this out?
Yes, as there was no style that could or wanted to teach it. As you know I practiced wrestling, Judo, Ju-Jitsu, Karate, Aikido, Kempo, Hapkido, Taekwondo, Escrima, Wing Chun, Ving Tsun, WingTsun. But none of these styles teaches self-defence. Shotokan Karate teaches Shotokan Karate, Ju-Jitsu teaches Ju-Jitsu, Wing Chun teaches Wing Chun.

Do you mean that each style sits in its ivory tower without looking out into the street to see what actually happens? And what about the modern Mixed Martial Arts?

They don’t look out into the street either, only at the ring or octagon. I like MMA as a sport! There are now a few reality video clips available that show how frighteningly naive and un-street smart some MMA sportsmen can be in the world outside.

Do you mean that they too do not practice self-defence?

As Bruce Lee rightly said, they all only do something that is vaguely related to self-defence.
Let me use a play on words to put my point: in all the 55 years of my incessant learning and studying, I have never had the impression that the aim was to teach me. They all only wanted to teach their style.

Yet every style, even the best, only gives us part of the truth. Everything appears logical from its own point of view, but other styles also see themselves as logical. When I look at the very few really effective Asian martial arts styles, the opposite view of a given set of teachings often makes just as much sense! Nonetheless, their adherents have an almost religious belief in the partial truths that have been instilled in them.

So what are the styles that actually work?
Styles that look at function. Where function comes first, and then the form. Form follows function! Unfortunately most styles start everything with the form (Kata). And usually that’s where they also end. In the meantime there are usually highly inventive explanations of the movements in the form based on zero street experience, plus far-fetched applications (Bunkai).

The new student wants to learn how to defend himself, and all he gets is forms.

Isn’t the situation similar in WingTsun?

Traditionally that is probably true. But as my teacher Leung Ting once wrote, tradition means “Nothing has been improved!”

WingTsun begins with the SiuNimTau form (SNT), though its primary purpose is not learning techniques, but rather mental training. Training our attentiveness and power of imagination, while in an apparently motionless stance. Although very few actually say it or still know it in would-be enlightened Hong Kong, it is all about developing the mysterious Jin force, about creating links between the parts of the body, and about developing harmonious physical unity which includes breathing, something we do not really talk about in WT at this stage because it adapts itself automatically.
But there are also movements to be learned in the SNT.

Yes, but these are secondary. Try explaining that to a student! What do you think would happen if I left him standing in the special SNT stance (IRAS) for 30 minutes without moving?

Quite so, and perhaps that was the reason why the masters before us added arm movements. This makes it more interesting for beginners, for beginners in particular always look at the arms. This is where they expect movements, and we need to meet this expectation if we are to avoid standing in a school with no students. It is the standing, or standing meditation if you like, that is important, and the arm movements are the sugar coating that makes the bitter pill (standing still) bearable. This standing exercise is the first indication that WingTsun, which was originally a northern system according to GM Yip Man, is conceived as what we call an inner style.

Yes, you can already see it from the structure: standing, few movements, a form of ChiSao training, fighting based on situational awareness and tactile/kinaesthetic training, use of sophisticated rather than primitive forces. Clearly defined principles. Starting with relaxation. And the power comes from the legs and torso, and is transferred to the opponent via the arms.
But in the SiuNimTau you don’t notice this (yet), as only the arms move.
Wanting to avoid mistakes like good Confucians, it starts with the smallest details that are furthest away from the central axis. With the 2nd form (ChamKiu) it gets closer and closer to the central axis as the source of power and moves on to the 3rd form, which I consider to be the true WingTsun. If Ng Mui and Yim Wing Tsun had studied sports and movement science with Prof. Tiwald, they would have put the horse before the cart! And they would have had the courage to let their students make mistakes, as you learn faster and retain more that way.

You clearly feel a need to bring new impulses into the teaching method.
I feel an obligation to bring about a rethink while I still can. That can only be a slow process. I find myself in the curious situation of contradicting some things that I parroted without critical examination in the 1980s. However you spell it, the WingTsun now practiced in Europe comes from what I taught at the time. Now that I know better and am presenting things differently, I am attacked using my own pronouncements from long ago. Clearly some people do not believe, after so many years and having been the first student of my Chinese master to be awarded the 10th grandmaster level 13 years ago, that I am capable of learning more.

But perhaps some people don’t want to learn more themselves, and prefer to close the door.
Very possibly. After all, it must be awful for someone who received his master certificate from me years ago, and only needed a few sets of the knife form to round it all off, as he thought, to be asked to look at things again in a different light. A SiFu such as myself, who reinvents WingTsun each day, and who builds everything on the principles and explains everything by them, must be more of a curse than a blessing for some. I’m sorry about that, but I can do no other.
You constantly strive to learn more. To understand WT even better, you even went back to university.

And I dragged my students and martial arts colleagues along with me. Many of them have now obtained their Bachelor, Master degrees, and a few a doctorate.
I have been working together with several Bulgarian universities since the 1990s. My friend Prof. Dr. Margaritov, the former Minister of Sport, gives me wonderful support.
In a similar way we are working together with the University of Derby in Buxton, England. At present we are conducting a correspondence course with 2 weeks of mandatory attendance with them on the subject of “Theory & Practice of the Martial Arts”. And with the Bulgarians on “Theory & Practice of WingTsun”. The English course of study requires no high school certificate, but a preparatory coaching course, while the Bulgarian course requires a Bachelor degree or similar. It will end in early 2014, enabling us to enrol new candidates. There will soon be more coaching courses for new students wanting to take part in the English course of study.
Is it true that you learned the so-called inner styles of Pakua, Hsing-I, Tai Chi Chuan for the university studies?

Learned would be too much to say, as I have so far only had time for five intensive weeks. But I have studied them, and feel that I have understood them and their principles to a good extent. Old, experienced northern Chinese masters (most of them professors) helped me in the process, without any secretiveness. The relationship was eye-to-eye.

How did you get this idea, and how did you make these contacts?

It was all on the initiative of my mentor Prof. Dr. Horst Tiwald. I owe more to this man than I can express. One of my oldest students has even suggested that we award him a posthumous, honorary 10th degree, and add his picture to our genealogical tree, however I believe that the modest Horst Tiwald would have protested against this. He did not even want me to cite his academic titles in publications. I can learn a great deal from him in this respect too.

What do you actually want to change in WingTsun?

Strictly speaking, nothing. And nothing at all about our WingTsun techniques, or in the solo forms. But quite a bit about the traditional teaching method! The fact that our Chinese predecessors were able to develop as ingenious a fighting system as WingTsun does not necessarily mean, as I have often heard, that they also developed a correspondingly ingenious teaching method.
Their method is based on learning by rote, on the drill-like instilling of habits by repetition. This is entirely out of kilter with their Chan-Buddhism, which is about presence of mind and also spontaneity.

What also disturbs me, and delays learning progress in the individual, is the cessation of movement at the end of a technique. This too is in contradiction with Chan-Buddhist thinking. We must allow the student to let his movement flow, even at the risk of him making mistakes.
We must depart from the many details and don’ts, and go back to the two fundamental forms of movement, receiving and giving back. That is what it is all about. Otherwise the student will not see the wood for the trees.

In this case the wood is the principles, and the trees are the many techniques?
Precisely. The techniques are only examples with which we confront the student in the solo forms, and also in the partner forms conceived by my SiFu, so that he understands and absorbs the principles involved. When he becomes a master himself, he really does not need them anymore.
Is that what you meant when you wrote this is “Essence”: “The student should not learn the exercises, but learn by the exercises?”

Bravo! In the end the WT master as I imagine him should not be distinguishable by specific movements, but by a way of moving that is “unspecific” – a term I did not invent but which I consider to be apt.

May I continue this interview for the next editorial? We still need to talk about your solution to the problem we addressed at the beginning.

With the greatest of pleasure. Answering questions is easier for me than thinking of topics.
Incidentally, “unspecific movement” is already the solution to the above.
The interview will be continued in October.