As my research work is currently concerned with the way towards Inner WingTsun, I have asked Grandmaster Oliver König, who together with DaiSiFu Thomas Schrön has long examined the subject of “grappling” and its relative value in WingTsun self-defence, to write a guest editorial on the state of affairs. 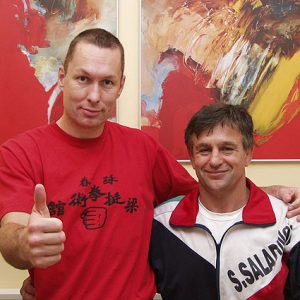 On reading this statement, many will scratch their heads and object, as WT after all has the following aspects too: ChiGerk with throws and counter-throws, learning how to fall, kicking when on the ground.

Experience has however shown that the traditional solo and partner forms and combinations of techniques do not yield much in this area.

This is why many Wing Tsun (or Wing Chun/Ving Chun etc.) followers have borrowed from other styles – sometimes quite openly, though in some cases the alien techniques are offered as an authentic part of Yip Man’s style. 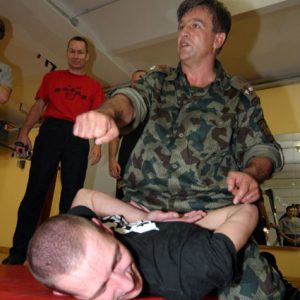 There is no need to apologise for preferring not to reinvent the wheel. The approx. 300 year-old Wing Tsun system did not fall from the sky ready-made, or come to us as commandments on tablets of stone. Wing Tsun is not finished, and hopefully our WT never will be.

We have concerned ourselves with this topic in the EWTO for some time, for example GM Kernspecht was already engaged in wrestling, Judo and Jiu-Jitsu in the 1960s. In my younger years at Langenzell Castle I practiced wrestling techniques to learn how to move on the ground and defend myself against them. 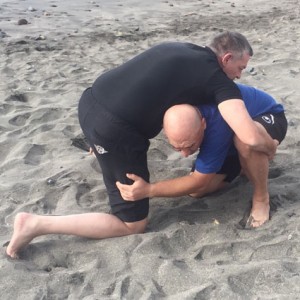 GM Prof. Keith R. Kernspecht has always taught combat at five distances (kicking, punching, elbow & knee, grappling & throwing, groundfighting distance), and explained quite openly that e.g. the “Control & Restraint” programme (overcoming an opponent without injuring him) does not belong to the traditional WingTsun programme he learned in Hong Kong, but is rather derived from other styles he followed beforehand.

Others take the attitude that WingTsun has a tradition of not going to the ground, and that a WingTsun fighter therefore has no need of groundfighting or anti-groundfighting.

In the EWTO we always endeavour to teach WT as a complete self-defence system, therefore it must also contain fighting from a prone position, i.e. groundfighting. The perfect self-defence system is not a single style, but rather a combination of different milestones, training methods etc. which must work under all circumstances. 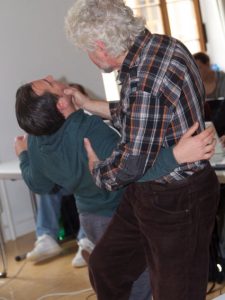 Personally I have the advantage that my mentor and teacher, GM Prof. Keith R. Kernspecht, has himself learned or studied many styles (Judo, JuJitsu, Aikido, Karate, Taikiken Kempo, WingChun, WingTsun, Thai boxing, Escrima, Sumo and various inner styles), and has encouraged us to learn more from the top experts in Sambo, groundfighting and grappling to close this gap in WT.

Towards the end of the last century he already experimented with Prof. Veselin Margaritov, one of the coaches for the Bulgarian national wrestling team, by using his ChiSao against wrestling. This enabled him to draw comparisons and give the wrestling team access to aspects of the WT-ChiSao method, whereupon they became European champions again for the first time in many years. There is a video doing the rounds on the web showing extracts from a session with GM Kernspecht having fun with a world wrestling champion in a standing position. In conjunction with ChiSao he later developed ChinNa techniques for locks, throws etc. But nowadays he no longer likes to lie on the ground. 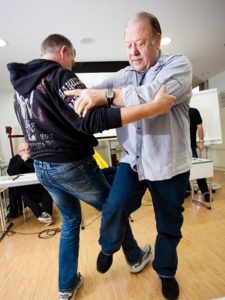 Our SiGung, GM Leung Ting, once said this: “If I could find a better style than my own, I would learn it!” This shows that in WingTsun we do not feel obligated to tradition, but purely to function.

Judo and Sumo master A. Schnabel showing a throwing technique with DaiSifu SchrönIn WingTsun history the Long Pole techniques were also derived from another style (Weng Tsun – the White Crane style). Our WingTsun ancestors first learned this style, then modified it to comply with our WingTsun principles.

After an excursion into various grappling styles such as wrestling, Sambo, Judo, Sumo and BJJ, I came to the conclusion that while WingTsun has a large number of grappling techniques, these are not taught effectively owing to a lack of training methods or because people often operate like an articulated doll and only work with their arms rather than with the entire body, i.e. the torso, legs etc. – which is essential for grappling with throws, counterthrows, prevention of throws and moving on the ground.

Where the WingTsun in Fatshan was concerned, it may be that the styles prevalent in this specific region were similar in structure to WingTsun: a relatively high, upright stance, low elbows, central punches, some form of sticking arms etc.

Encounters with representatives of the wrestling fraternity, and especially groundfighters, were not on the agenda. Even in Kano’s Judo, which he developed from JuJitsu, there was initially no groundfighting. Jigoro Kano, the creator of Judo, was scathing about it: people should have the dignity to stand upright, not squirm around on the ground like a reptile.

The aesthetic ideal of standing upright was given priority over functionality.

There was no need for the development of (anti-)groundfighting techniques, as fighting was not done on the ground.

So what is meant by “grappling”? Let me use a definition from Wikipedia:

“Grappling refers to techniques, manoeuvres and counters applied to an opponent in order to gain a physical advantage, such as improving relative position, escaping, submitting or injury to the opponent. Grappling is a general term that covers techniques used in many disciplines, styles and martial arts that are practiced both as combat sports and for self-defence.” 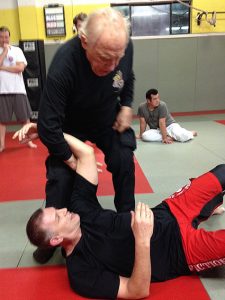 If done correctly, WingTsun ChiSao can also be regarded as a form of grappling, but it is usually only applied over a limited range (not in all 5 phases) and also practiced using incorrect methods. Choreographed partner dances and practicing prefabricated sequences of techniques does not produce good results, however it gives many the illusion that they can control the chaos of a real fight.

WingTsun studies and my route to grappling

As part of our academic courses of martial arts study with the University of Plovdiv/BG and the University of Derby in Buxton, we also examined a wide variety of styles which included some grappling styles such as Judo, Sambo, wrestling, JuJitsu, Sumo, the All-Style Fighting System of Kaicho Jon Bluming and Chinese ChiNa. Naturally comparisons were also drawn with our own WingTsun grips, throws, locks, chokes and ground techniques. 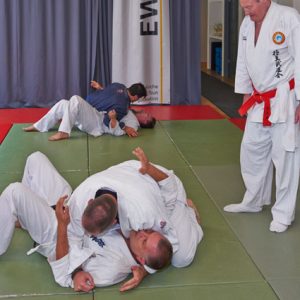 We invited experts from various styles, and I became more and more intensively acquainted with the material. We were taught Sambo by Saladinov, at the time the chief instructor of the Bulgarian special unit fighting drug and gang crime. Prof. Veselin Margaritov as a former Bulgarian national wrestling coach showed us how good professionals train, and what techniques they use. JuJutsu expert Erich Reinhardt explained the biomechanics of his style. Judoka and Sumo expert Arthur Schnabel (bronze medallist for Judo in the 1984 Los Angeles Olympics, multiple European champion in Judo and Sumo) gave us an insight into Judo and Sumo. Budo legend Kaicho Jon Bluming taught us his groundfighting method developed from what ‘Opa’ Schutte, Don F. Draeger and Mifune had taught him.

My colleague and friend Thomas Schrön and I had been considering for some time how we might improve our training with respect to groundfighting and throws, etc. We were particularly interested in the training methods used by the various styles and experts. In our constant search for the most effective methods in this area, we were finally referred to the legendary grappler “Judo” Gene LeBell on the personal recommendation of Kaicho Jon Bluming. As we were not content merely to learn the theory, we decided to take practical instruction and went on an educational visit to the USA for several weeks, so as to learn directly from GM Gene LeBell and his master student GM Gokor Chivichyan. 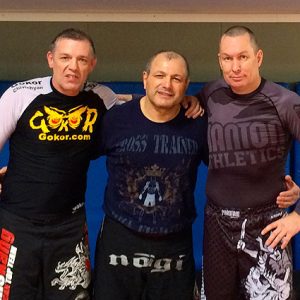 In his active time Sensei Gokor remained undefeated in over 400 fights. The system used by GM LeBell and GM Gokor is a mixture of catch wrestling, Judo, Sambo etc. It lacks the usual set of rules that influences the individual styles. The school has produced numerous very successful master students, e.g. Ronda Rousey, the undefeated UFC fighter, Karen Darabedyan, one of the world’s best grapplers, Karo Parisyan, Manvel Gamburyan and many more champions.

Each day we had several training sessions with Sensei Gokor and his professionals, and sometimes budo legend Gene LeBell would come by himself and make corrections, or demonstrate one of his grappling applications. 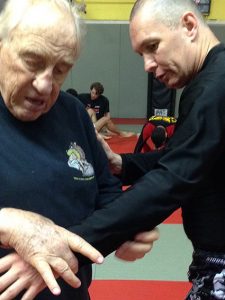 Our search for a method that is compatible with the characteristics of our WT was more than rewarded!

Yet it was not just the intelligently conceived technical aspects, but also the training methodology that were very interesting.GM Gene LeBell explaining the right way to grip when grappling

We found more than just another form of sport named grappling with Sensei Gokor and his students, we were warmly received into this family of professionals and amateurs, and Sensei Gokor took very good care of us! We are looking to intensify this cooperation in the future, and details will follow as things happen

Naturally we will not be keeping these latest findings to ourselves. We are now working to adapt the training methods for our WT self-defence, structure the technical aspects and consider how they can be logically and smoothly incorporated into the teaching programmes. A programme for horizontal combat, i.e. groundfighting, is indispensable, but it must be taught clearly and logically. We already have fragments of such a programme in the curriculum for students, but experience has shown that this approach is not the best.

A programme of this kind is intended as an additional package, and it will not be mandatory for examinations, as some students are unable to fight on the ground for health reasons, or do not want to. Our aim is still to avoid going to the ground during self-defence, but if it comes to that, every WT student should be well prepared!

DaiSifu Thomas Schrön and I have already taught sections of the programme in a few seminars and during the university training week, and the feedback has been completely positive.

We are still on the case, will report the latest to you from time to time, and of course also hold a corresponding teaching session at the International Seminar. See you soon!